We would be more than happy to help you. Our team advisor are 24/7 at your service to help you.

The reality is that there is still some difficulty in touring Tibet. Flights/trains are limited, and altitude sickness may be an issue. Therefore it is worth considering our alternative tour options.

Provinces bordering Tibet (Qinghai, Sichuan, and Yunnan) have many of the attractions Tibet does, without the access restrictions. The following places will be less-crowded, less high (less risk of altitude sickness), and less expensive. 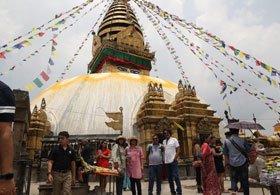 Shangri-la in Yunnan may not have the Potala Palace, but it does have Tibetan Buddhist monasteries, and Tibetan villages and people.

Ganzi's Dege Scripture Printing Lamasery near the Tibet border is a storehouse of Tibetan culture.

Tongren in Qinghai Province may not have monasteries as famous as Ganden or Tashilunpo, but it is the birthplace of Tibetan thangkas, and has some notable Buddhist temples/monasteries.

Sichuan Province may not have Mount Everest, but Ganzi Tibetan Autonomous Prefecture does have Mount Gongga, the most easterly 7,000m+ peak in the world, and a beautiful scenic area in Hailuogou Forest Park, to appreciate it from.

Nine Village Valley (Jiuzhaigou) may not have Lake Namtso, but it's placid mountain lakes, and the rainbow-colored waters in its unspoiled valleys, are every bit as inspiring.